Chaga is a wood-rotting mushroom known for its high content of bioactive substances, the enzyme superoxide dismutase being the best known among them. The name of Chaga stems from Russia where it occurs most frequently, having been an integral part of the natural medicine of local population since the old days. It grows mostly in Siberia and is therefore also called the Siberian Chaga. It constitutes a specific growth stage of the Clinker Polypore (Inonotus obliquus) during which no spores are generated. It grows on birch trunks (mostly in the Siberian zone) and forms a big spherical black body with a characteristic surface and interior (gold-rust) structure. The Chaga is a wood-decaying non-green organism which draws all of its active substance from birch trees in which they are contained naturally.
As Chaga grows primarily on birch trees and much of the sclerotium itself is actually wood fiber and not mycelium, many medicinal compounds from birch like betulin and betulinic acid end up in the sclerotium. The outer black layer on the canker contains high amounts of melanin which can be beneficial for our skin.

Sort by:
Best sellers Relevance Name, A to Z Name, Z to A Price, low to high Price, high to low
Showing 1-1 of 1 item(s) 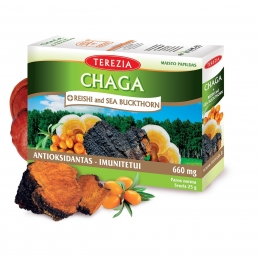 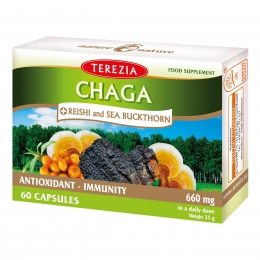